A controversy has blown up on social media in the last few weeks over DUI checkpoints.  It all began with a video of police interaction with a driver who refused to roll down his window and speak to officers has gone viral. The video was shot New Year’s Eve at a DUI checkpoint in Levy County, Florida. 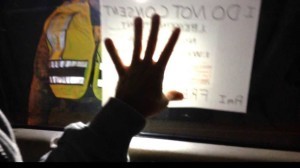 The driver displays a flier that reads “I remain silent, no searches, I want my lawyer.”

In the video, the driver hangs it outside the window in a plastic bag that contains his license, registration and insurance information. He never opens the window and never says a word.

The deputies waved him through.

The idea behind the video is that people are often detained on a pretext of having alcohol on the breath or bloodshot eyes. Obviously, police cannot claim to detect such things through a closed car window. Law enforcement officers don’t share the same sentiment.

The video was shown to the nearby Pinellas County Sheriff, Bob Gualtieri, and he said if a person tries that in Pinellas County, they will be arrested. Read the story here. “It’s about doing the right thing and we are trying to do the right thing to protect the public and keep drunks who kill people off the road,” Gualtieri said. “The deputy can’t assess the person. And, if you can’t assess them, you are obstructing the investigation,” Gualtieri said. “Just because you dangle in a bag with your drivers license, insurance card and registration out the window doesn’t mean you’re not drunk.”

Florida Highway Patrol Spokesperson Sgt. Steve Gaskins said the intent of DUI checkpoints is never to violate anyone’s rights — rather, they are to manage traffic and pull drunk drivers off the road. He said whether your window is up or down, troopers can still spot the signs of impairment.

The U.S. Supreme Court ruled sobriety checks are legal. The only caveat: law enforcement agencies do have to advertise them.

The Oklahoma Court of Civil Appeals addressed the constitutionality of DUI checkpoints in Geopfert v. State ex rel. Dept of Public Safety. In Geopfert, the Moore Police Department conducted a roadblock in Moore, Oklahoma on New Year’s Eve, for the sole purpose of checking drivers for DUI. At a routine stop, an officer observed evidence of intoxication in Geopfert. The officer asked him to pull over and at that time he was given a field sobriety test. He was arrested and had a blood alcohol content of .13. Geopfert appealed the administrative DPS suspension of his license alleging the DUI checkpoint was unconstitutional. The trial court applied the Supreme Court’s balancing test laid out in Sitz, and ruled the DUI checkpoint to be valid under the Constitution. The Court of Civil Appeals affirmed the trial court’s ruling based on the facts and method in which the DUI checkpoint was conducted. The local paper advised its readers of the checkpoint. the Department put up signs warning motorists of the roadblock. The motorists were not detained if the officers did not detect any sign of alcohol use. The stops lasted approximately ten to fifteen seconds, whereas, the approved delay in Sitz was 25 seconds. The roadblock was successful in removing some intoxicated drivers from the New Year’s traffic and the officer did not arrest Geopfert until he observed Geopfert was intoxicated.

In summary, whether a DUI checkpoint in Oklahoma is constitutional would be determined by a court based on all the factors surrounding the stops. However, if officers carry out a DUI checkpoint as the Moore Police Department did in Geopfert, it is likely a court would uphold the stop.

If you have questions regarding DUI, or have been arrested for DUI in Tulsa, please call our firm for a free consultation. Our Tulsa DUI Lawyer is ready to aggressively fight for your rights and good name.